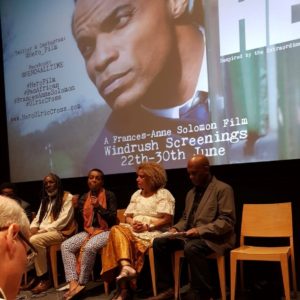 Hero has landed. Frances-Anne Solomon’s film about the life of Ulric Cross – eight years in the making ‑ has finally reached London, though only for a few screenings. If the audience reaction at the premiere at Brixton’s Ritzy cinema was anything to go by, this film, like its subject, is destined for great things.

In conventional terms, Cross was indeed a hero. He was born in Belmont, Trinidad, and after school and some inconsequential jobs, he joined the Royal Air Force when war broke out. He became a navigator for an RAF pathfinder squadron, flying low-level missions over enemy territory to mark targets for the bombers to hit. This was not a job guaranteed to increase your life expectancy, and his near-suicidal decision to fly 80 missions without a break as Cross did was something that even he couldn’t really explain. He was, famously, the most-decorated Caribbean serviceman, gaining both a DFC and DSO for his cool-headed courage.  SEE LINK TO READ MORE: