After a successful UK tour the film about an extraordinary Pan-African hero is returning to South African shores to feature at the Joburg Film Festival this month. 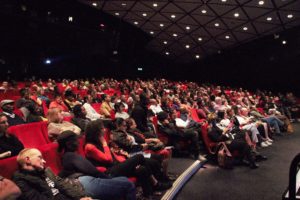 When HERO premiered at the Durban International Film Festival in July, it received high praise. And now it has just come off a massively successful tour of the UK where it screened in cinemas with special screenings at community centres and theatres in major cities across the UK from Edinburgh to Brighton. During the tour, the film garnered rave reviews from serious publications such as The Financial Times and the London Evening Standard, which wrote, “If you are interested in the birth and evolution of Pan-Africanism, you’ll be gripped”.

Other critics in the past have written that HERO is “an electrifying, dramatic motion picture, filled with twists and turns that will thrill audiences across the globe.” And some commended the filmmaker, Frances-Anne Solomon, by saying she “deserves lavish praise for showcasing an historical legend, and for helping to change the negative stereotypical portrayal of people of African descent on the screen.”

HERO poignantly crafts the story inspired by the remarkable life and times of Trinidadian war hero, judge and diplomat Ulric Cross. He was recognised as the most decorated West Indian Pilot of WWII and had a remarkable influence in the fight for liberation across Africa. The film spans the dynamic and transformative times in which he lived. It is the untold story of those Caribbean men and women who helped to liberate Africa from Colonialism. “The film resonates with audiences around the world. From his career in the Royal Air Force, to his time as a lawyer and judge working behind the scenes in the independence movements of Ghana, Cameroon and Tanzania, Ulric’s life blazed a trail that inspires us all,” says the director.

HERO went on to win the Best Diaspora Narrative Film at the prestigious and star-studded 15th Africa Movie Academy Awards (AMAA) ceremony in Lagos, Nigeria. “As a curator, as someone who has been working with Pan-African cinema for a number of years – on the African continent, in the Caribbean, England and in North America – HERO is really important, because it brings both the factual aspects of this important story and time together with a dramatic presentation and knits them together intricately,” says June Givanni, who is one of the AMAA international jury. “It has both a dramatic impact and an impact that carries with it a significant amount of information for audiences. To be honest, I can’t think of many films that have done this and that do this. For me as a curator, it’s a gold mine and I congratulate Frances-Anne and everyone who was involved in it.”

As an award-winning writer, director and producer herself Solomon is thrilled that HERO has received such significant recognition. “I am grateful by this endorsement by the AMAA jury which recognises HERO’s significance in the canon of African Diasporic film and its importance for audiences around the world by the endorsement from the AMAA jury as it recognises HERO in the context of the reactions of audiences which have been heartfelt,” she says.

Solomon, who was raised in the Caribbean, and lived and worked in the UK and Canada, is a producer, curator and entrepreneur in film, TV, radio and new media. After a successful career as a TV Drama Producer and Executive Producer with the BBC in the UK, she launched the CaribbeanTales Media Group in Canada and Barbados. HERO, which is produced by her company, is her third feature film as a director.

Filmed across the UK, Trinidad, Ghana and Canada, HERO features an international cast of celebrated black actors including Trinidad and Tobago’s Nickolai Salcedo, in the lead role of Ulric Cross, alongside UK stars Joseph Marcell (Fresh Prince of Bel Air), Fraser James (Resident Evil), Pippa Nixon (John Carter), Canada’s Peter Williams (Stargate SG1), and Ghanaian superstars John Dumelo, Adjetey Anang and Prince David Oseia. “It was an honor to play the role of Ulric Cross, who was a giant. It was a transformative experience for me as it opened my eyes to the global role that people like Ulric and others played on the world stage,” says the leading man about his character.

The film’s Pan-African theme is befitting its return to South Africa as it takes its rightful place at the Joburg Film Festival, which kicks off its six-day celebration of 60 films from across the globe on November 19th . The screenings will be hosted in six different venues throughout Johannesburg including: Nelson Mandela Square in Sandton, Ster-Kinekor in Sandton City, Cinema Nouveau in Rosebank, Maboneng’s Bioscope, and Kings Theatre in Alexandra.

“Ultimately, the story is about us. About who we are as African people, and as citizens of the world,” says Solomon so succinctly of the film.

Book tickets for HERO through www.sterkinekor.com for the 24th November for screening at Ster Kinekor theatre

Tickets for the 23 November screening are free and will be given on a first come first basis, 48 2nd Ave Alexandra, cnr Hofmeyer Street / Richard Baloyi Street