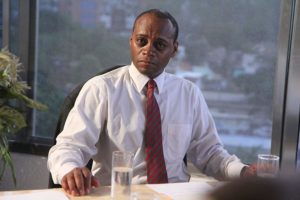 Alt A Review managed to talk to Fraser James who plays George Padmore in the new Frances-Anne Solomon film Hero. With a career taking us back to 1991, James is one of the UK’s in demand actors whose resume spans from popular TV to stage and film roles. Most recent film roles: we can see him in Terminator; Dark Fate with Arnold Schwarzenegger to be released late 2019. He was in Idris Elba’s Yardie, Resident Evil, Sometimes in April. For TV he has been in Loch Ness, Holby City, Law and Order, Origin, Babyfather, The Affair, to name a few. The actor talks about his 2008 exhibition Underexposed which he said was a response to the conversations around the lack of black role models in the UK leading to crime and underachievement particularly among young black men. James stated: “I just think it is a nonsense. I mean we absolutely have black role models here they are just not exposed in the same way they are for example in America”. He also talks about working with Hero Director Frances-Anne Solomon saying “… you know there aren’t too many directors that do what Frances-Anne does”….  SEE ARTICLE FOR MORE:

Newsletter Signup
In this article:Articles
Up Next: