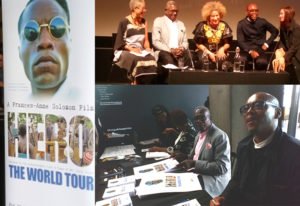 Some of the cast with their director at the BFI/ Actors Rudolph Walker and Fraser James [Photos: Debbie Ransome

Review of the film HERO by Debbie Ransome

Director Frances-Anne Solomon described it as “delivering our narrative” on the period which her film covers: World War Two, the post-war years and the emergence of independent nations in Africa. Speaking after the UK premiere of her biopic HERO at the British Film Institute (BFI) on London’s South Bank on 18 May 2019, she told a packed cinema how she had edited together newly dramatised scenes with archive footage from the war and post-war years in England and Africa to follow the life of her subject, Ulric Cross.

If you’re unfamiliar with the hero of the film, Ulric Cross had an amazingly diverse life.  See Caribbean Intelligence Article for More…