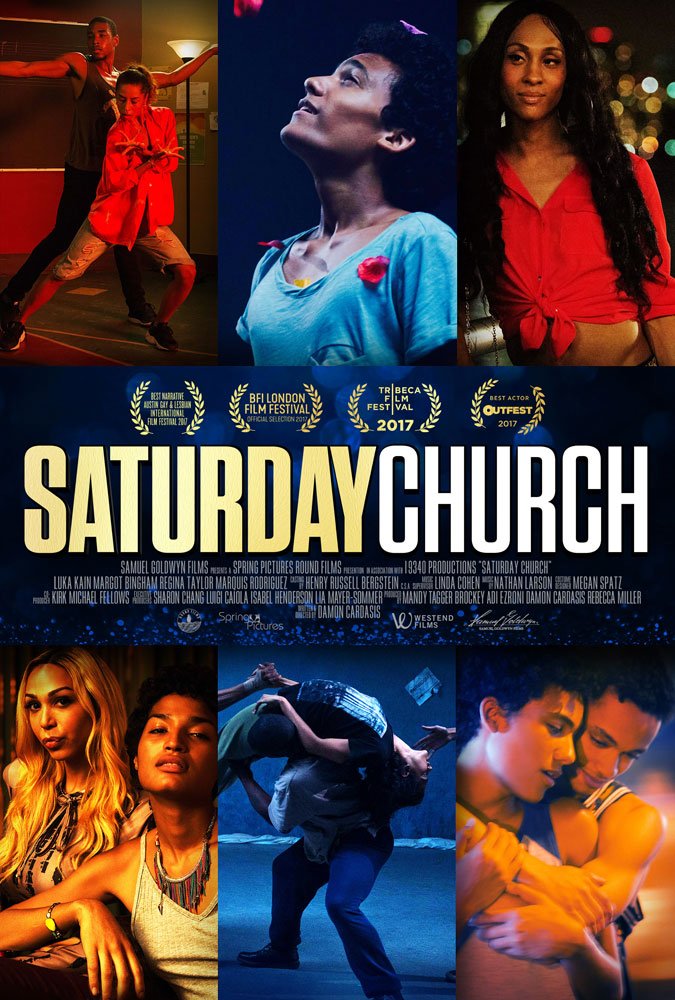 As I noted in my film review last Sunday, the CaribbeanTales International Film Festival(now in its 13th year) will take place in Toronto next month, starting with a big gala night on September 5. That night will include the first-ever preview screening of Hero: Inspired by The Extraordinary Life and Times of Mr. Ulric Cross, directed by Frances-Anne Solomon. A non-profit organization registered in Canada, CaribbeanTales‘ mandate is to foster and encourage intercultural understanding, citizen participation, and racial equality.

September 15 is the night for films with an LGBTQ theme. Saturday Church is one of three to be aired on that date, alongside two Canadian shorts, under the theme: Rise Up: Queer and Here. This is directed and written by Damon Cardasis – his first feature-length film – and produced by Samuel Goldwyn Films. So, here is my review…Get your tickets today!

This film begins with a military funeral, outside the church. A subway train rattles by, and a family is in mourning. One member of that family is Ulysses, a 14-year-old African American, who has just lost his father. Remember, the mythical Ulysses went on a long journey, and it was a long way home. This modern-day Ulysses’ young widowed mother is now obliged to work long hours to support the family. She brings the tight-lipped Aunt Rose in to supervise Ulysses and his eight-year-old brother Abe in her absence, “until we get everything sorted.”

Well, things don’t exactly get sorted – at least, not the way some family members would have expected. For Ulysses, perhaps the death of his father may have propelled him into a deeper realization of his gender identity, although the grieving process is hardly dwelt upon. We do understand, though, that he had supportive parents and a happy childhood.

Ulysses is a quiet and introverted teen, with his earplugs permanently in his ears, a preoccupied gaze, and a slightly annoying younger brother. Not unlike many teenage boys. The actor who plays him (sixteen years old at the time of film-making), Luka Kain, has a delicate bone structure, tousled hair, and dark grey eyes. Emotions pass fleetingly across his face. He tries to avoid eye contact when confronted by teasing classmates in the locker room, and with strangers on the street, and with Aunt Rose too. Like many teens also, he is struggling with his sexuality. But he has to keep it inside. At home, he closes doors and tries on his mother’s red high-heeled shoes (“I was just messing around,” he tells his reprimanding little brother).

I dislike the phrase “coming of age story” – but this is one. It’s also a musical, with little touches of fantasy. The director clearly felt that the story of LGBTQ youth needs to be told in a sensitive way, as a journey towards love, acceptance, understanding. There are several elements in Ulysses’ life. There is the church (ever present in the landscape); there is family, and his longing to be comfortably at home; there is the school; there is his gritty New York neighborhood, where he is fascinated by some older patrons outside a gay bar, half-heartedly following them.

And there is “Saturday Church” – a weekly programme in the church basement that welcomes him and other members of the community, including many young people. By the way, this programme does actually exist. Ulysses is taken under the wing of transgender Ebony and her friends Heaven and Dijon, who take her to church. Here LGBT people, (around his age or a little older, I would say) can get a meal, relax and just comfortably be themselves. The friends’ conversation about Dijon’s proposed new look – 1980s-style, à la Melanie Griffiths in Working Girl – is hilarious, by the way.

Ulysses has a kind of escape mechanism – which is music, and dance, and bright colors, in his imagination. A fantasy sequence takes place in his head while he is holding his hands under the air dryer in a bathroom, the drops of water shivering. He is a rock singer, and his derisive classmates his back up dancers. In another lovely scene, he sings a defiant “I’m Moving On,” with his drowsy, fellow residents of a homeless shelter as dancers. He ends up happily knee deep in multicolored paper petals. In another scene, a dowdy bunch of flowers in a store bursts into brilliant daisies. Then there is the gentle, adorable Raymond, a gay young man who is a part of this small but nurturing group, and who sings a “goodnight” love duet with Ulysses.

A river of music runs through the narrative – interrupted, in Ulysses’ most stressful moments, by the incessant noise of traffic. The street scenes are often disorienting for him. The streets are where he appears most vulnerable. I have mixed feelings about musical films, although once the first song or two is over with I generally get used to the idea. However, when the empathetic Ebony burst into a song about her many broken love affairs, I was taken by surprise (after about half an hour, and I hadn’t fully realized this was actually a musical). Nevertheless, for me, the format works here. The musical interludes, always ending a scene, generally mark milestones, moments of insight. They illustrate the young hero’s changing emotions.

Ulysses discovers the exciting world of the New York “vogue” scene. These are not actors, by the way. The scenes in a basement club, with the dancers “voguing” in joyful but competitive exuberance – bring a kind of theatricality. The extravagant costumes, the flowing, intuitive, seemingly improvised dancing fill the screen visually. Moreover, the heightened sensations are infectious. Ulysses breaks into a smile.

Towards the end of the film, Aunt Rose – like Ulysses’ mother, a rather one-dimensional character – tries to regain her authority. She attempts to cut Ulysses down to size, bring him down to earth if you will. “He’s crying out for help,” she tells his loving, anxious mother. “What do you think is going to happen to him, in this world? He’s a black boy. And he’s gay…”

By this time, we are clear that there is no stopping Ulysses now, whatever the future holds. There he is, looking exquisite at the club (which is called a “ballroom”) and cheered on by his friends-who-are-family.

This is a heartfelt, gentle story that manages to avoid sentimentality. In many ways, it’s a simple story, with a simple message: What really matters is love, and you need to go out and find it.