“The Incursion,” a 24-minute documentary directed by Jamaican Sasha-Gay Lewis, has been selected for the Caribbean Tales International Film Festival, which opens in Toronto next week. It will be aired alongside two shorts that I have already reviewed, as well as Kaneal Gayle’s documentary Dancehall’s Asian Ambassadors, on September 19th under the heading Redemption Tales. If you are in Toronto next month, you should mark this in your diary!

For Jamaicans, the word “incursion” means only one thing: The attack by the Jamaica Defence Force (JDF) and the Jamaica Constabulary Force on the inner-city community of Tivoli Gardens in Kingston, in search of a man wanted by the U.S. Government for narcotics trafficking: Christopher “Dudus” Coke. The series of horrific events began on May 23, 2010 (It was, by the way, vividly described over a year later by New Yorker journalist Mattathias Schwartz. It is very good writing, although the accounts of ‘outsiders’ are not always entirely accurate). It is not known how many people (mostly young men) died at the hands of the security forces in Tivoli Gardens – the official number was 73 civilians and one member of the security forces. Many believe civilian casualties were much higher. Many bodies were never found. Coke was eventually arrested just outside Kingston – under somewhat farcical circumstances – and is now serving 23 years in a U.S. jail. There was subsequently a Commission of Enquiry (the full report is posted here. It is 900 pages long and was tabled in Parliament in June 2016).

A related incident remains unsolved: The horrific murder of chartered accountant Keith Clarke in a blizzard of bullets, allegedly by JDF soldiers, in his pyjamas at his home in the hills of St. Andrew. This took place on May 27, a few days after the incursion. As the security forces pursued Mr. Coke, they had a tip-off that they were to go to the house of a man who was allegedly harboring him. They got the wrong house – that of Mr. Clarke, a completely unconnected and innocent man. The trial of three JDF soldiers charged with Mr. Clarke’s murder was halted by the Supreme Court in April of this year. This was after the defense lawyers raised the issue of certificates of immunity from prosecution for the soldiers, signed by former Minister of National Security Peter Bunting. The case will be heard again in full court on September 17; Mr. Clarke’s family say they will continue the legal fight.

Another “loose end” (if one can call it that so glibly) is the matter of the mortars. Evidence given during the Enquiry suggested that mortars were indeed used during the incursion. Residents reported hearing loud explosions that sounded like bombs. The Independent Commission of Investigations (INDECOM) had obtained a warrant to search JDF headquarters and to take evidence on oath from JDF members. A Full Court refused the JDF’s motion to block the warrant on July 30, 2018, giving INDECOM free rein to go ahead with its investigations. However, it took over two years to make this decision. Yes, it is all long drawn out, painfully so. It is not clear where this will go from here.

At the end of last year (December 6, 2017) Prime Minister Andrew Holness officially apologized for the Tivoli Gardens “incident” in Parliament. Opposition Leader Peter Phillips called for a Truth and Reconciliation Commission, a suggestion that the Prime Minister did not entirely dismiss. Compensation of some J$200 million to representatives of the deceased and to those injured was also agreed by Cabinet, but subsequent media reports suggest that not everyone has been paid.

Indeed, the years-long aftermath of the incursion seems like a permanent sore that never heals. Every time it seems to start healing, it itches. Then it is scratched and starts to bleed again.

Here is my review of the film:

This is how Mrs. Joan McCarthy of Tivoli Gardens, West Kingston, describes the feelings of the residents as they awaited the arrival of the security forces. Unable to fly away.

This film is a well-constructed series of interviews with four residents of Tivoli. It is without comment from any politicians, Government officials or members of the security forces (except for the Police Commissioner in a brief media clip). It is also devoid of any reference to the reported, alleged activities of Christopher “Dudus” Coke’s gunmen in the area at the time. In other words, it is simply an account of the victimization of members of two families, as told by surviving members.

Annette Irving, who lost her 36-year-old sister Petrina in the 2010 Tivoli incursion, says that she is not expecting much out of life. “If I’m looking for something, I’m looking for justice…” she says. Her voice is hoarse. She adds, her arms folded: “Which in Jamaica, there is no such thing.”

Annette sometimes looks hard at her interviewer as if to say: No argument about this. End of story.

The scenes are broken up by the occasional explanatory piece of text. Three or four minutes in, we are told that Tivoli Gardens is “ruled by” the “notorious” Christopher Coke (“Dudus”). These words obviously heighten the drama. So do the three gunshots later on, against a black backdrop. I do not think we really needed this device – the tension was already there, building up slowly throughout. We knew what to expect. The explanatory text could perhaps have been narrated, but this is only a minor point.

Back to Annette, sitting with a wide-eyed child who is watching cartoons on TV, in a cramped, over-furnished living room. Annette shuffles through old photographs of her sister. She taps the photos with purple fingernails. She does not talk about her sister Petrina in the past tense “because I’m not there yet.” There is no doubt that Annette and “Pet” had a close relationship – laughing, fighting, sharing even bathwater. Her account of their relationship is innocent, harmless. Immediately after laughing at a memory, Annette presses her hands to her face, in tears.

The intermittent images of everyday life in Tivoli Gardens are – well, almost mundane. If they were chosen to provide contrast to the steadily growing horror of the narrative, this works well. Washing hangs on a line. A child pushes himself around on a skateboard. Barefoot teens play football, and neighbors stop in the street for a chat. Dogs chase a couple on a motorbike. Sneakers dangle, thrown over a wire. This is Tivoli Gardens, several years later.

And then, there are bullet holes in a bedroom wall. Terrified voices over the radio.

Annette’s neighbor on the next floor up, an elderly woman named Joan McCarthy, lost “her boys” Dwayne and André. She repeats several times that she stared and stared – so anxious to take it all in, to understand what was happening, trying to believe her own eyes. She saw Dwayne’s “brown foot” slipping out of a sheet – the sheet from his own bedroom. Her account is particularly vivid and piercing. The camera captures her eyes and her body language, as she stands in the room where Dwayne died.

Earlier in the film, Annette lists the modern amenities that Tivoli Gardens residents have, with an air of defiance: “We have our own flush toilet. We have ceramic tile. We have glass windows…” They don’t live in squalor – at least, not in their homes. Her words are, ironically, interrupted by images of a gully clogged with garbage, and an old toilet tossed to the side of the road. What is this telling us? That their pride was always misplaced?

After all, what is this film? It is, in essence, the story of a family – or two families. Brothers and sisters. It is a story about loss, the loss of three people – and regret and bitterness and poverty. This story was multiplied all over Tivoli Gardens – a surprisingly small community of a few thousand people – and in fact, it is repeated across the island daily, daily, by families who have lost members to violent crime, and to police killings. It is the family’s story, told from their angle – only. There are many other stories.

It is also, of course, the story of a community – an extraordinary one in many ways, but as the carefully selected street scenes show, also quite ordinary. It’s a snapshot. We see murals, children, dogs. One wonders about how the institutions were impacted: Tivoli Gardens High School, famous for its dancers; the churches.

This sensitively crafted documentary adds little that is new to the story of the incursion – the worst abuse of human rights in Jamaica since the Morant Bay Rebellion of 1865. That could not be expected, however, in 24 minutes or even in a much longer film. Why is this?

Because, more than eight years later, the story of the Tivoli incursion is deeply complex, obscured, unendingly present. Its unanswered questions linger. It hovers in the air like the smoke from a burning police station, and the helicopter and the mysterious American plane over West Kingston that day. Those two or three days in Tivoli remain dark and terrifying, and unsolved.

Towards the end of the film, we are left with this lack of finality. The elderly lady asks where the bodies of Dwayne and André are “at this moment.” The family was not able to bury those bodies. They were thrown away somewhere. They could not identify Dwayne and André from the five files (yes, five) filled with photographs of dead Jamaicans that they looked through at the Community Centre.

The word “tragic” cannot in any way describe this house-to-house massacre in a close-knit collection of homes and apartment blocks. There is a strange intimacy to these killings, in small rooms and backyards, hemmed in by walls. We see the corner of a room, next to a flat screen television, “where André’s brain was.” In the same room, the shiny, polished cats and gilded elephants, arranged on the shelves of a typically Jamaican “what-not,” where a small computer monitor takes pride of place, gaze on at the spot where André fell. Details like these – and the angle of this particular shot – are particularly well captured by the camera.

But no. The story of Tivoli is not over yet. Do we, here in Jamaica (let alone elsewhere in the Caribbean, or the world) even understand what happened there from May 23 – 25, 2010? Did the incursion take on a life of its own, like a kind of madness?

How do we make sense of it all, through film-making? Can we, indeed, capture this in film, years later? This is certainly a brave attempt by Ms. Lewis.

“This mark cannot come out,” says the resident, rubbing the stained surface of the shelf. Indeed, it cannot. 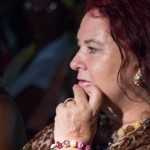 I retired as Public Affairs Specialist/Information Adviser at the U.S. Embassy in Kingston, Jamaica in 2012. I am British by birth, married to a Jamaican with a son living in London. I have lived on this amazing island for 30 years. I am currently a Director of the Environmental Foundation of Jamaica, the Natural History Museum of Jamaica and the Farquharson Institute for Public Affairs. My interests and pursuits are creative writing, reading (especially international fiction), environmental issues (bird-watching is a real passion), art, music (I am "wired" for rock but also love jazz and classical), and indie films from around the world. And Arsenal Football Club.