MAYOR BEVILACQUA TO PRESENT JEAN AUGUSTINE WITH KEY TO THE CITY 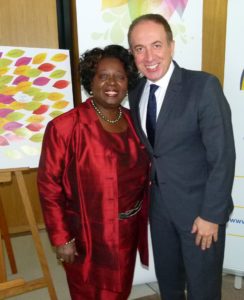 The Honourable Jean Augustine with Mayor Maurizio Bevilacqua at the City of Vaughan’s International Women’s Day event in 2014.

​The Honourable Jean Augustine is a passionate educator, life-long public servant and a national trailblazer, Mayor Maurizio Bevilacqua said today. Mayor Bevilacqua made the comments following his announcement that Ms. Augustine, Canada’s first female African Canadian Member of Parliament and Cabinet Minister, will be bestowed with the Key to the City.

Born in Grenada, Ms. Augustine immigrated to Canada in 1960. She earned both a bachelor’s and a master’s degree in education from the University of Toronto. In 1993, Ms. Augustine was elected Member of Parliament for the constituency of Etobicoke-Lakeshore, serving four terms until 2006. In 2002, Ms. Augustine was appointed Secretary of State (Multiculturalism and Status of Women), and, in 2003, she became Minister of State (Multiculturalism and Status of Women), later serving as Assistant deputy speaker of parliament until her retirement in 2006.

In 2007, Ms. Augustine was nominated by the Government of Ontario to become the first Fairness Commissioner, a position created to advocate for Canadians with foreign professional credentials. She retired from the position in March 2015. In 2008, the Jean Augustine Chair in Education was established in the Faculty of Education at York University. Ms. Augustine also served as the National President of the Congress of Black Women of Canada. She has received multiple awards and recognitions for her work. Of note, Ms. Augustine is a Member of the Order of Canada and a recipient of multiple honourary doctorates. In 2014, Ms. Augustine was the keynote speaker at the City of Vaughan’s International Women’s Day event and in 2019, met with Mayor Bevilacqua to discuss issues of diversity, inclusion and multiculturalism.

Founded by Mayor Bevilacqua in 2017, the Key to the City honour is reserved for distinguished individuals as a recognition for their contribution in areas of human endeavors, including business, sport, arts and culture, public service, education and human rights.

“One of the greatest privileges of public life is the opportunity to work with exceptional individuals who give of themselves, in a very selfless way, to the noble mission of creating a fair and just society. I was proud to serve alongside my dear friend, Jean Augustine, both as Members of Parliament and cabinet ministers, to advance issues of national and international importance. Ms. Augustine is a dedicated public servant, passionate community advocate and a champion for human rights, diversity and multiculturalism. Her life’s work, including the nation-wide recognition of Black History Month, continues to positively influence Canadian society. It is my hope that through this recognition, more people and future generations will be inspired to follow in her footsteps.”
– Mayor Maurizio Bevilacqua

“I am honoured to receive the Key to the City of Vaughan from my dear friend and former colleague Mayor Maurizio Bevilacqua. During our time as Members of Parliament, we formed a bond that was strengthened by our shared experience as immigrants as well as the mutual belief in our duty to promote the values of fairness, equality and diversity within Canadian society. Together, we worked to advance important issues related to multiculturalism, citizenship and immigration – including my private members motion that established Black History Month in Canada. My career has been dedicated to building inclusive, enriching and welcoming communities right across Canada. I can say with complete confidence that the people and the City of Vaughan embody these values. I am grateful for Mayor Bevilacqua’s continued friendship, and for his leadership in these challenging times.”
– Hon. Jean Augustine, PC, OOnt, CBE, CM