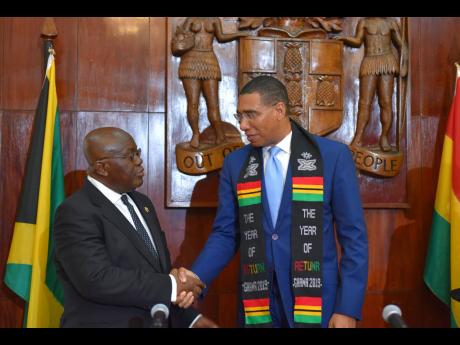 President Akufo-Addo of Ghana came to stay in Jamaica for the weekend. He was entertained at the Seville Great House by the sounds of the Maroon drums and the abeng. He told us that Ghana had named 2019 the ‘Year of Return’ and that Jamaica and Ghana would be working out a visa-free relationship. I had urged this in my recent article ‘Fly to Africa – Kingston-Accra direct’. All we need now is a Black Star airline, and Africa would be less than 12 hours away.

Ghana, for me, is the most special country. I knew it from work I had done with the government of President Rawlings, and I visited often. I loved the endless seashore and the palm trees, and the green and brown landscapes inland. I loved the mixing of the modern with the traditional, and all the colour and dignity of the traditional rulers who still have jurisdiction in many fields. I loved the peacefulness of Accra, bustling but friendly. Jamaica’s murder rate is more than 30 times higher than Ghana’s.

But there was a darker side to my connection to Ghana. My great-uncle Lord Edric Gifford had been a major in the Third Anglo-Ashanti war in 1874. The British forces reached Kumasi, where they demolished the palace of the Asantehene, the traditional ruler. Before destroying it, the British marvelled at its contents, which included “rows of books in many languages”. Who are the savages here?

The ruler was ordered to pay 50,000 ounces of gold as “indemnity for the expenses which he had caused to Her Majesty”. When he refused, the whole royal family was deported to the Seychelles Islands, where they stayed until 1924. What arrogance and cruelty! But great-uncle Edric had been awarded the Victoria Cross for his gallantry.

I visited the castles of Elmina and Cape Coast, where tens of thousands of kidnapped Africans had been penned for months before going through the doors of no return. As I stood on the floor of the dungeon, I was told that I was standing on more than two metres of packed excrement, produced by decades of defecation. Can any Briton with any heart see this and not want to make some apology and amends to the descendants of those who had to create that floor? And there in the Castle Museum was a picture of Lord Edric Gifford VC chasing down the Ashantis who were fleeing from his regiment’s guns. What gallantry!

President Rawlings was one of those few military leaders who were determined to end military rule and stand for election. He invited me in 1990 to speak at a constitutional conference to be held in Kumasi. When I arrived, I was told that I was to be honoured with an audience with the Asantehemaa, the Queen Mother of the Ashanti people. My mind was in turmoil.

I was told that the protocol was that she would greet me and ask me for what purpose I was in Kumasi. I replied that I had come for the conference, but I had another purpose of my own. What was that? “I want to apologise, humbly and whole-heartedly, for the crimes of my great-uncle Lord Edric Gifford, and to say that I come here in a totally different spirit.”

The Asantehemaa, a woman small in stature but deep in character, born in exile, then in her eighties, thanked me and said, “The Ashanti bear no personal grudge against the British.” She was to live another 25 years, dying at the age of 109.

Standing in Seville, I reflected on these memories in the context of the movement for reparation of which I am part. That apology had pleased the Queen Mother, but its deeper effect had been on me. In the same way, the apology demanded from the United Kingdom by CARICOM, when it happens, will be a sign that Britain is finally ready to face up to the consequences of the atrocities which it committed against African peoples and descendants.

Reparation is not only a just claim for compensation for the damage which African descendants in the Caribbean still suffer as a result of the barbarities of slavery. Caribbean people were starved economically, but British people were poisoned psychiatrically by the inculcation of racial prejudice. Throwing people into dungeons, packing them into cargo ships, burning down their royal palaces, and keeping them in chattel slavery was justified in the minds of the British by the ideology of white supremacy.

That ideology shows its face again and again: the treatment of the Windrush generation, the stigmatisation of immigrants in the Brexit campaign, and the imminent election as prime minister of Boris Johnson, who has described black children as “pickaninnies” and Muslim women as “letterboxes”. It begins in the schools with the celebration of the British empire as a “civilising mission”. In a recent poll, 59 per cent of British people thought that the empire was something to be proud of, and only 19 per cent felt shame.

Reparation is not just an issue for people of African descent. White people need reparation just as much. As I was writing this article, a letter came in from the curator of one of the museums which display the Benin Bronzes. He wanted to see them returned to the people of Benin. Last month, I had a visit from the leader of the black movement for reparations in the UK. She spoke of the need to draw in white British support, as had happened in the alliance of progressives that played its part in the anti-apartheid campaigns.

These were signs that the movement of reparation for the effects of the transatlantic trade in Africans is going to increase. As the Notting Hill carnival, it was started by a few activists but now is a huge joyful festival of ‘one love’ in multicultural London.

I stood in Seville with the president and Jamaican Culture Minister Olivia Grange. I represented the third point in the triangle, which used to be a triangle of evil, now a triangle of friendship. I vowed to the spirit of the Asantehemaa that I would work, together with my fellow citizens in Jamaica and the UK, and with my friends in Ghana, to ensure that it becomes a triangle of prosperity and justice.

Lord Anthony Gifford, QC, is a Jamaican attorney and English barrister, and member of the National Council for Reparation. The views expressed are his own.