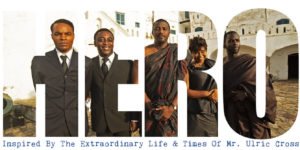 Hero: The story of a Caribbean man in Africa’s independence struggle

A film about a decorated World War II pilot from the Caribbean, a lawyer, and then a man integral to independence on the African continent, is a headliner at the Joburg International Film Festival. Speaking with the filmmaker triggers much more thinking about history and hidden heroes.

Too often, discussions about race and the African Diaspora have a one-way feeling to them. They become the story of Africans forcibly transported elsewhere, then turned into chattel slaves for the remainder of their days and then those of their children’s as well. Then the emancipation from slavery in the Caribbean and North America comes about (almost as if by a mysterious deus ex machina), followed by civil rights struggles and political upheavals. What is usually left out in this is the complex interplay between the people of the African Diaspora and of Africa itself.

On the display of family photographs in the hallway of our Johannesburg home, a display curated by my wife, there are family portraits from both of our families. In her case, however, displaying them has also been an effort to reclaim a history that, too often, has been rubbed out by the more usual, dominant colonial historical storyline of South Africa.

There are unusual photographs of some early 19th century forebears, representatives of the complex mix of people who became today’s coloured South Africans. But, rather than subservient farmers and retainers, these pictures show young men who were ambitious students at those early mission stations in the Cape.

Then, in the 20th century, there are more pictures, but of the men in uniform who answered the call to the imperial colours to fight for Britain in France in the First World War, and then in North Africa during the Second. From their respective journeys, they could glimpse a society that…

Newsletter Signup
In this article: